Yes you read that right. Little seems to be known nation-wide about this epic Lake District challenge only tackled by the toughest of souls, but completing it gives you the chance to have your name written in history, among the small list of legendary ultra-distance fell-runners who have completed it before you. Here's Team KMC's Richard Anderson's write up about the challenge and his own experience completing it mid-winter in a time of 19 hours 55 minutes. 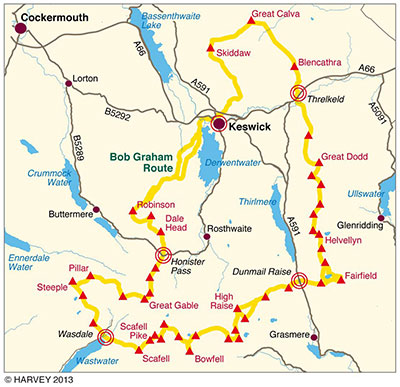 The Bob Graham Round is a fell running challenge in the Lake District. It is named after Bob Graham, a Keswick guest-house owner, who in June 1932 broke the Lakeland Fell record by traversing 42 fells within a 24-hour period. The Round is 66 miles long, with 26,900 feet of ascent and traverses 42 fells. It starts and finishes at Keswick Moot Hall.

Like so many other things, my 2020 sporting year has not turned out as planned. I was hoping it would involve a return to triathlon and a sub-9-hour ironman. As it happens, I've morphed into an ultra-distance fell-runner and gone after some of the famous Lakeland rounds.

Having set the fastest known time for the Frog Graham Round in September, I was hungry for my next big challenge. The obvious next step was the Bob Graham Round. October and November were busy months for me at work. Whilst I could train hard, I didn't feel I could target a round until mid to late December. So, my first attempt at the 'Bob' was to be a mid-winter one. I trained hard throughout October and November, getting out on the fells in the dark a couple of nights a week and doing long runs on the route at the weekend. I trained in all conditions; rain, wind, waist deep snow and glorious winter sunshine. Come December, I knew the lines and was ready to give it a crack. The Lake District weather can be unpredictable at the best of times, but even more so in December. I had planned to do my round on 19th December, but the weather had other ideas. With rain, snow and gale force winds forecast, I had no choice but to postpone to the 20th and again to the 22nd December, which turned out to be a genuine weather window. It was a cold dry day with only light winds. As you'd expect the ground was wet and boggy in places and there were also patches of ice and snow up high. But given the weather that had gone before and what came immediately after, I was lucky with the conditions.

After an agonising few days waiting for the weather to change, I was very ready to go. I set off at midnight with my leg 1 support runners, Olli Dawson and Ali Weymouth, under a star lit sky. The climb of Skiddaw felt easy in just over 62 minutes. We dropped off the back of Skiddaw and Olli used his single-track prowess to find the best possible line through the bogs. I think I only went up to my waist once, which felt like a good outcome in the conditions! Next, we were onto Great Calva and traversing even deeper bogs to the Caldew river crossing. With heavy recent rainfall, the Caldew was up. We jumped in and waded across, with the fast-flowing icy water over knee height.Next it was up Mungrisedale Common and onto Blencathra summit and the first real challenge of the day, an icy descent of Halls Fell. After a bit of slipping, sliding and dancing on ice I was relieved to find myself off the ridge and down in Threlkeld after just over 3 hours. I met the support car and fired down an early morning coffee and bacon sandwich and picked up my leg 2 support, Richard Keefe. There was no real room for slippage on the run to Dunmail, as Richard had his car booked for a service in Carlisle at 7.30am before a full day at work.So we got on our way and made for Clough Head. We were running under the most incredible canopy of stars and I saw 2 shooting stars above the summit. Weighed down by my kit and nutrition, Richard missed them both!

Leg 2 is very familiar terrain and the run along the Helvellyn ridge just flew by. The rock was sometimes icy and there was a bit of snow up high but overall it was just a great night to be running on the fells. The clag came in as we were traversing Nethermost and Dollywagon and completing the out and back to Fairfield but it caused no issues. At Dunmail I changed my shoes and socks, had another coffee and picked up my leg 3 and 4 support, Wilf Goodfellow and Beau Smith. About 5 minutes into the climb of Steel Fell, Wilf asked a very reasonable question. Why do a Bob on the shortest day of the year? A good question, to which my response was that it wasn't like we had anything better to do! I suppose that was partly true, but I think the real reason is that I love running on the fells in the winter with my mates. We live locally and train year-round on the fells, running in the darkness and winter conditions is normal for us. A winter Bob never felt like a ridiculous idea, just a great challenge!


I actually found the section to Sergeants Man the toughest psychologically of the day. My stomach was not feeling particularly happy, the legs were a little weary and the bogs relentless.A caffeine gel and the first rays of sunlight of the day were enough to lift spirits and my moral was restored as we picked up the more runnable ground off High Raise and into the Langdales.

Bow Fell is the first of the giants of leg 3. The line from Rossett Pike is easy to miss but Wilf and Beau's nav was spot on. Now running on icy rock, the going was slowed but we continued to tick off the big fells, crossing Esk Pike and Great End before making our way to Ill Crag and Broad Crag in the clag. We reached the top of Scafell Pike and dropped to Mickeldore and the bottom of Broad Stand, where Mark Duggan was waiting with a rope. The climb of Broad Stand was a little dicey, but we made it, bagged Scafell and descended the scree to Wasdale. As I sat down for another coffee and sandwich, the day was starting to bite. Beau, being the true support runner changed my socks and emptied the scree from my trainers whilst Wilf loaded up for leg 4. My nutrition for the day was mainly KMC NRG Gels, I estimate that I got through over 30 on the day. These were supplemented by jelly babies, cereal bars, rice pudding, sandwiches, crisps, brownie and flapjack at the road crossings. I also drank approximately 11 litres of KMC ISO MIX drink. Whilst my legs tired through the day, I never felt short on energy. I am very grateful to the team at KMC for providing the fuel that got me round and my support runners for carrying it all! Leg 4 starts with the long, steep climb of Yewbarrow. It is a tough moment on the round, you can see the high fells which you have to cross to get to Honister and the going is slow. But we kept moving and kept ticking off the summits. I think this is the most spectacular section of the round; out and back to Steeple with a rare view of Ennerdale, a rocky climb of Pillar and a scramble up Red Gully to Kirk Fell. Standing on the summit of Kirk Fell at sunset, the imposing presence of Gable and impending darkness loomed large. Truth be told, Gable looks worse than it is, and we just about made it to the summit with some daylight. All that remained was a largely downhill run to the support car at Honister. Wilf and Beau ran with me for over 10 hours and were immense; spot on with navigation, keeping me fuelled and my spirits up! Their final act was to run ahead on the final descent and let support know I wouldn't be stopping! At Honister I was joined by my leg 5 support, Olli Dawson and Jo Rycroft. It was also good to see Richard Keefe, who had now finished his days work and retrieved his car. The climb of Dalehead felt good. I was very glad to be off the rock of legs 3 & 4, Keswick was in touching distance and I was on the fells I know best, the North Westerns. Olli and Jo kept the pace honest as we crossed to Hindscarth and the final summit of Robinson. Just a downhill run to the Moot Hall remained. The descent off Robinson was not pretty but I got down! On the grassy path and road down the Newlands valley I tried to lift it but the best I could manage was a fast shuffle. I could see that I would be very close to the 20 hour mark so was glad that Jo and Olli continued to stretch things out.

I made it back to the Moot Hall in 19 hours 55 and was greeted by a decent group of (socially distanced) friends. It was special to be able to share the moment with those who had supported me both on the day and in the build-up. My overriding emotions were relief that I could sit down and elation that I had completed the round and had an awesome day out!

My time was the 4th fastest winter round of all time and the 2nd fastest mid-winter round. I am very grateful to my support runners, most of who gave up a night's sleep and days holiday to get me round. Also a big thanks to my roadside support, RedVenom compression who provided my run kit, KMC who provided my nutrition and everyone who followed me on the tracker and sent messages of encouragement. I'm not sure what will be next but rest assured I'm not done with either endurance sport or the big Lakeland rounds just yet!

What to Eat Between Meals! - More or Less Calories?

8 Tips for Training for your first Ultramarathon

Can running help you lose weight?

Why Mobility is Important for Runners and How to Improve it